Digital Anthropology in the news – February 2019

Digital Anthropology in the news – February 2019

Digital Anthropology founder Richard Skellett has been featured in various news outlets and publications throughout February, having been asked to comment on a range of different topics including future of work, social enterprises and security.

AI, ethics and the social enterprises of the future

Richard spoke to Priya Kantaria from Verdict about his ambitions for Digital Anthropology and how the social impact of the application of technology and AI is not being understood.

Richard believes that the rise of social enterprises is coming, as people become smarter and more aware of the dangers of relying heavily on traditional, earning-per-share based companies. He cites his own choice not to shop using Amazon, due to their belief of displacing humans with robots and says people should use their ‘moral compass’ when deciding where to spend money.

In a piece for GovTech Leaders on whether the traditional ‘big four’ are driving the best transformation for the public sector, Richard questioned the value that the big four bring. He said:

“If you’re going to go off and have impartial advice, and you’re spending public money, that advice is aimed at supporting services, it’s wholly inappropriate to spend it with an earning per share outsourced consulting company. It should be spent with a social enterprise company who is going to reinvest those profits back into the business and go off and help the communities that will be affected by the disruptions that are going on.”

Does AI have a role in the world of identity? And if so what is it?

Richard was part of an expert panel for ID Bulletin, a magazine for people working in the identity industry, discussing the role of AI in the field. He spoke about the rise of biometric identification, and warned of the dangers of technology and AI holding personal data.

“We need to trust exactly who holds it,” he said. “And know that they are only using it within the permissions we have given. Likewise, there is a responsibility from companies to uphold this and that the data they hold is safe and secure. The potential for hackers or thieves to exploit this information and have access to the most intimate and personal details about us is terrifying.”

Richard featured again on TalkRadio’s early breakfast programme with James Max at the end of January for the daily newspaper review. You can listen again to the piece by clicking here, and selecting the 06:00-06:30 option 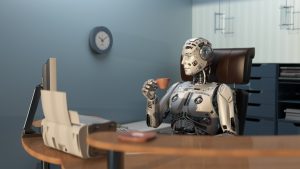