Digital Anthropology founder Richard Skellett spoke to BBC Future for a piece that came out in early December on the rising use of robotics and artificial intelligence at fast food restaurants.

The article features Creator in San Francisco, California, where two large robots can churn out up to 120 burgers every hour thanks to a complex algorithm that does everything from grinding the meat, shaping and then cooking the burgers to order through to managing toppings, sauces and the bun. Elsewhere in California, technology developed by Zume Pizza allows for pizzas to be prepared and cooked on their delivery route to recipients.

“Just what are the jobs they are creating? And do they exist in the same number as the jobs the automation is replacing?

“Technology should augment people, not replace them, AI and bots should free up people to add value to an enterprise.” Click here to read the piece in full. 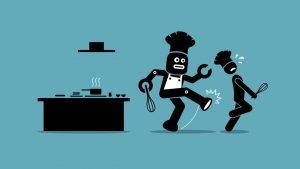