A technology company in Japan has unveiled a humanoid robot prototype designed to autonomously perform heavy labour or work in hazardous environments.

The ‘Blade Runner-style’ robot has been developed by the Advanced Industrial Science and Technology (AIST) and comprises environmental measurement and object recognition, full-body motion planning and control.

Joe Baguley, Vice President & Chief Technology Officer, EMEA at VMware, said: “Yes there are some jobs that will be replaced by robots, but these are the boring repetitive tasks, the dangerous tasks.”

“The increase of Robotics and AI in the workplace will cause mass redundancies, not only in lower skill roles but right across the work landscape including roles in the City.”

Richard used the piece to highlight the misconceptions that we are entering a fourth industrial revolution – when instead it is more of a second digital revolution, and the belief that automation and AI won’t begin to displace jobs until closer to 2030. Recent examples of stories from the fast food industry in the United States show that this is happening right now.

Richard added: “The social and economic impact should be number one on the agenda. This is not ten years away regarding workforce impact. It’s here and happening today around the world, especially in economies where labour costs are dramatically lower than in the UK.”

Click here to read the full story on the humanoid robot developed in Japan, or find out more about Digital Anthropology by signing up to our newsletter. 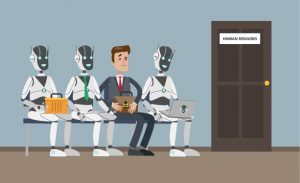