Skip to content
Jobs Gone in the Blink of an AI

Much has been made of the comments from Bank of England Chief Economist Andy Haldane earlier in 2018 that ‘large swathes’ of people will become ‘technologically unemployed’ as AI makes roles obsolete. Nodding towards the other industrial revolutions he warns of the ‘dark side’ of industrial revolution where people are left disenfranchised, jobless and struggling to make ends meet. Speaking of heightened social and financial tensions and a rise in inequality, he discussed the importance of ‘learning the lessons of history’ when it comes to automation.

The retail industry, is one of the most cited examples of job loss through automation, with its workers being advised to upskill in order to remain relevant. Haldane suggests that people at risk of automation focus on skills of human interaction, face-to-face conversation and negotiation.

The relentless march of the robots has evolved to the point where we have developed systems with cognitive and intellectual capability. If a machine can think as well as do what is left over for us? How exactly can we upskill?

What’s left over for us is simply this: humanity.

At the end of the day, a ‘thinking machine’ is only an algorithm. It is a process and a series of binary; if this, then that. Fulfilling a function doesn’t always lead to a fulfilling experience for the consumer.

Let’s go back to retail for a second. Haven’t we all had immensely frustrating experiences of self-service checkouts? Which of us hasn’t (literally) cried out in frustration at the robotic cry of ‘unexpected item in bagging area’? Haven’t we all done that frantic searching around for a real flesh-and-blood human to press the magic buttons or wave the magic card over the machine to stop it from ‘malfunctioning’?

Only, the robot isn’t malfunctioning. It’s behaving exactly as it’s been programmed to. What’s happening is that we are frustrated by the algorithm, so we’re left with a less than pleasant customer experience. You see, systems serve themselves first, and when we have to oblige the autobot; we don’t like it. It feels submissive.

It appears that big businesses, in the race to automate, have forgotten to take stock of the basics. They’ve been so busy building new operating systems that they have forgotten how the system operates – that is to say, through human experience.

Rage Against the Machine

Chair of the Artificial Intelligence Council, Tabitha Goldstaub, goes some way to validating this by suggesting that people accept the challenges as well as the opportunities AI offers us. She argues we make ourselves ready for the change and focus on creating new jobs for the future workplace.

To an extent Goldstaub is correct. We cannot swim against this sea of change. Automation is here to stay whether we like it or not. Those self-service checkouts are not going anywhere. Let’s face it, despite our frustration, they do add value in terms of time saving. Goldstaub says: ‘The challenge we now have is in ensuring we are ready for that change.’

Rather than getting angry about our lot, maybe it’s time to start thinking about placing more value in the qualities a ‘human being’ can bring to the work place which, put simply, cannot be automated. By extension, we need to re-imagine business. It’s high time we put more effort and emphasis on things like: understanding, compassion, human responsiveness, communication, empathy. These are the things which make people connect and ultimately which make people buy.

It’s like we have forgotten how to run a functioning organisation. In our rush for connectivity we have actually disconnected from the human experience. Operating more in line with human’s natural instincts will make the business experience – especially for the customer and employee – better than it’s ever been. Emotion has more power than reason so it’s time to balance the beta parts with beating hearts.

Maybe this is the opportunity in automation. 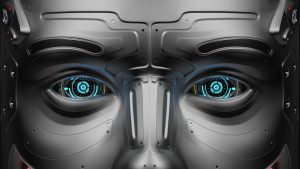